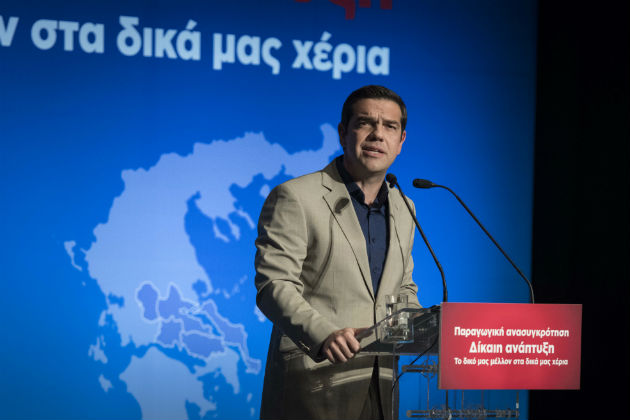 The country is now on a safe path of transition to stability and growth, Prime Minister Alexis Tsipras said on Thursday night, in a speech wrapping up the 2nd Regional Development Conference for Central Greece taking place in the city of Lamia.

He stressed that the goal was to organise this transition in the best and most productive way, in order to avoid the distortions and problems of the past.

Tsipras thanked all the mayors and Central Greece Region governor Kostas Bakoyannis who took part in the conference, saying that this had confirmed that dialogue, communication and joint planning with local community organisations and local government “is the only way to effectively face the challenges of the future”. He noted that there had been “sincere cooperation” between the government and the regional authority in the last two days.

Communication and collaboration on a local, sectoral, regional and central level was now more necessary than ever, Tsipras added, even if there could not be agreement. “It is enough if we understand that growth, the developmental plan in all its aspects, the social alliances that are needed for its implementation, does not lend itself to a petty party politics approach and spin,” he said.

Talking about the Central Greece region, Tsipras noted that this had great and varied potential for growth but also faced serious environmental, social and production problems. These were the result of a policy that for years allowed flagrant violations of the law and accumulated damage to the environment, the prime minister said, as well as an anarchic and unrelated financing of projects and business activities that led to a waste of funds and reduced performance of public and private investments.

He revealed that the government is in talks with the European Commission, in alliance with other countries, to push for the extension of the criteria for the distribution of Community funds with additional geographic and social indices that take into account the repercussions of the crisis. He also stressed that the government was using all available financial tools to support the region, listing the various initiatives taken.

Tsipras, who had earlier met a delegation representing Larco employees, said the government intends to protect public ownership of Larco and announced that the government had brokered an important agreement between Larco and the PPC and that staff had agreed to meet with ministers to discuss a strategic plan to solve the problems.

Outlining the plans for overhauling the region’s production, Tsipras said this would be based on three axes: support for the existing productive and social base, support for infrastructure and in energy issues, and finally, environmental recovery and sustainability, especially in the areas around the Asopos River.

The prime minister noted the highway projects underway in the region and announced that a revised plan for water resources management for the rivers of central Greece will be ratified by December. He also referred to the need for a new policy on managing waste, with a transition to 50 pct rates of recycling and reuse.