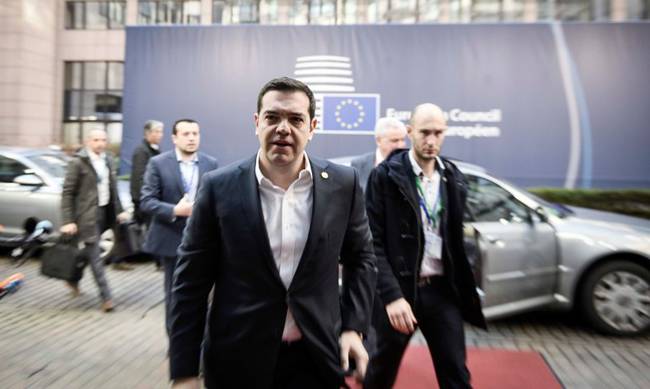 Turkey’s provocations in the Aegean and developments with Cyprus’ exclusive economic zone (EEZ), EU-Turkish relations, the FYROM name dispute and Greece’s relations with Albania will be at the center of the meetings Prime Minister Alexis Tsipras will hold on the sidelines of the Informal meeting of the EU’s 27 heads of state or government in Brussels, as of Friday.

Tsipras is flying to Brussels tonight and will meet with Cypriot President Nicos Anastasiades.

On Friday, Anastasiades will brief the EU summit on developments with the EEZ and Tsipras is expected to support Cyprus’ actions noting it is necessary to protect the country’s sovereign rights. He will also mention Turkey’s stance in the Aegean and EU-Turkey relations.

The EU leaders are expected to discuss institutional issues , such as the European Parliament’s composition after the 2019 elections and possible transnational lists, how the EU appoints top positions, including the so called ‘Spitzenkandidaten’ and he political priorities of the multiannual financial framework (MFF) after 2020, i.e. the EU’s long term budget.

On the sidelines of the summit, Tsipras will meet with French President Emmanuel Macron and Italian Prime Minister Paoli Gentiloni. He will also meet German Chancellor Angela Merkel, Bulgarian President Boyko Borissov and European Commission President Jean-Claude Juncker, during which EU-Turkey relations and migration will be discussed.

According to information, after his return to Athens, the prime minister will meet on Saturday with a delegation from the US Congress. The agenda will include Greek-American relations, FYROM’s name issue and Turkey.

Tsipras’ program in Brussels is the following:

07:45-Participation in the PES preparatory meeting

09:00-Participation in the International High Level Conference on the Sahel

12:00-Participation in the Informal meeting of the EU’s 27 heads of state or government