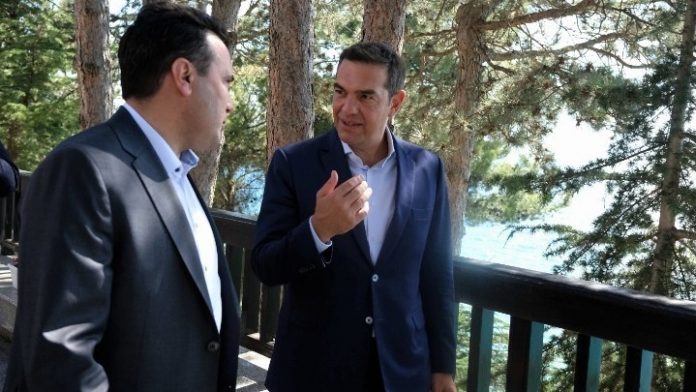 SYRIZA-Progressive Alliance leader Alexis Tsipras met on Thursday with Prime Minister of North Macedonia Zoran Zaev in the context of the first “Prespa Forum Dialogue” held in the neighboring country.

Tsipras, whose government signed the Prespes Agreement in 2018, explicitly noted the importance of the strict implementation of the agreement, particularly in terms of the names of public entities and of textbooks, and called on Zaev to move in this direction.

The main opposition leader also called on the Greek government to ratify the soonest possible all memoranda of collaboration with North Macedonia.

Greece and North Macedonia signed the agreement because progressive politicians fought for it who believed that differences between states can and should be resolved with a mutually acceptable and peaceful way, based on International Law.

“We progressive politicians know it is hard to dismantle walls, but it becomes easier if you know how to build bridges wtih your neighbors – this is what Zoran and I achieved, with Nikos Kotzias and Nikola Dimitrov,” Tsipras said, referring to the Greek and FYROM foreign ministers who signed the agreement. Reaching an agreement came after realizing that no one else would resolve the problem between the two countries, he added, while noting that the two countries “convinced the EU to take another look at the Western Balkans and unfreeze the accession process.”

Besides the accession process being stuck with North Macedonia, it is stuck with Albania’s accession also, Tsipras said, and the EU cannot find solutions. “For this reason I would like to convey a message to our friend Bulgaria to take a big step forward. I know very well how difficult it is to find solutions and resolutions to sensitive issues. But it is necessary that Bulgaria take this step with North Macedonia in order to hold an intergovernmental conference the soonest possible. It is necessary that Bulgaria convey the message that it is part of the Balkans of the future, which we can only build together, not one against the other,” he urged.

He also said that it is necessary to reach a mutually acceptable solution on the Kosovo issue, based on International Law and not on nationalist lines, and he called on its prime minister – “a progressive politician with a long future ahead of him” – to move forward with the Belgrade-Pristina dialogue, which all support.

Things are at a critical point in the region, Europe and the world, and there should be no return to the past, he stressed.

On his side, Zaev affirmed that federations which have not changed their names to reflect the terms of the agreement will be doing so in the near future, and that some of the name changes are at the stage of completion. He also underlined that the new passports with the constitutional name will be distributed in the following days, and he will be receiving his on Monday.

At the Dialogue’s panel, and referring to the Prespes Agreement, North Macedonia’s prime minister said that its signing proved that the Balkans can find solutions to difficult issues. He called the agreement the most positive news he had to convey to the public as a prime minister, and said the agreement opened the way to his country’s membership in NATO.