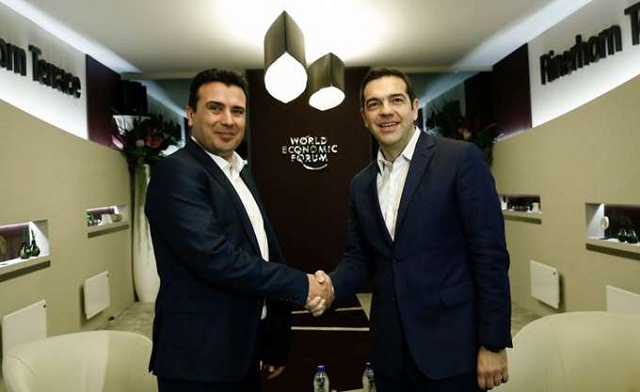 In statements after his meeting with FYROM Prime Minister Zoran Zaev in Davos on Wednesday, Greek Prime Minister Alexis Tsipras said their efforts sought to bring to the forefront “the things that unite our people and find a solution to those that divide us.”

“We need to promote an agenda of cooperation and joint development in order for the Balkan region to go forward and meet the challenges of the 21st century,” he said in a joint press conference with Zaev after their meeting on the margins of the World Economic Forum.

This was Greece’s position as a responsible power promoting stability and cooperation in the region, and the reason why it had promoted initiatives of a bilateral, trilateral and quadrilateral level, he added.

Tsipras underlined that the relations of the two countries must rest upon a firm foundation of mutual respect and good neighbourliness, noting that this meant more than just solving the name issue: “It means that we must first tackle irredentism in all its forms and with guarantees that we will leave no window open that might allow similar provocations to be created anew in the future,” he said.

The prime minister said that Zaev had expressed his willingness to immediately proceed with important initiatives in this direction. “On my part, I announced to him that in this framework I am prepared to press ahead with processes suspended by my government; for example, the neighbouring country’s candidacy for the Adriatic-Ionian Initiative and the ratification in the Greek parliament of the second phase of the country’s association agreement with the EU.”

The Greek prime minister sent a message, however, that all the open issues must be resolved in order for FYROM to make progress in its ambitions to join the EU and NATO. He made it clear that the two countries must agree on a compound name for use in relations to everyone (erga omnes). Tsipras also announced an agreement with Zaev to intensify, under their supervision, the negotiations being carried out under UN auspices.