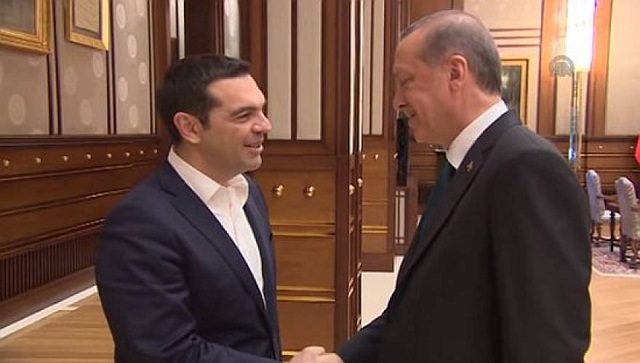 Prime Minister Alexis Tsipras met with Turkish President Recep Tayyip Erdogan in Beijing on the sidelines of the Belt and Road Forum for International Cooperation organized by the Chinese government. The meeting was held at the Four Seasons Hotel.

Erdogan adopted it at a great extent and at the end of the meeting, he expressed the wish to fully implement the Treaty of Lausanne, according to sources of the Athens Macedonian News Agency (ANA).
The two officials discussed the Greek-Turkish relations, the Cyprus issue, the European course of Turkey, which Tsipras said that Greece supports, the migration issue and the issue of visas for Turkish citizens visiting countries of the European Union.

As for the European course of Turkey, Tsipras said that Greece supports it, as long as Turkey itself seeks it and wants it. With regard to the migrant issue, Erdogan said the EU does not fulfill its commitment to visa-free travel for Turkish citizens visiting European countries. Tsipras responded that Greece is seeking the implementation of the EU-Turkey Agreement.In the debate on the Cyprus issue there was no convergence of views on the progress of the negotiations.

The Prime Ministers of Greece and Turkey, Alexis Tsipras and Binali Yildirim, will meet in Thessaloniki in October, as agreed in Beijing. Meetings of Foreign Ministers Nikos Kotzias and Mevlout Tsavousoglou will precede.