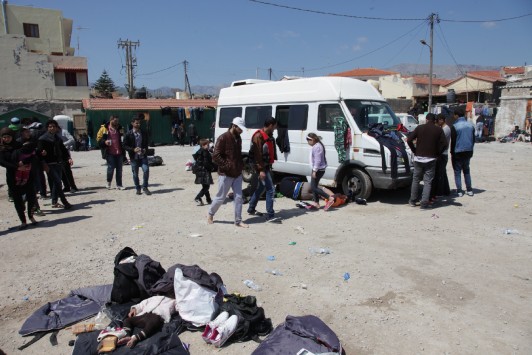 The UN Refugee Agency and Amnesty International condemned the serious violence that broke out in the municipality-run refugee camp at Souda, Chios, during the last few days, when tents were burned and two activists beaten by suspected extreme-right supporters.

“I strongly condemn any acts of violence, resulting both in the local population and the refugees being seriously hurt”, said Philippe Leclerc, UNHCR’s Representative in Greece. “All perpetrators of such acts should be found and brought to justice”.

Following an attack against the residents of Souda with Molotov cocktails and heavy stones on Thursday night and other violent incidents earlier this week, several tents burned and serious damages were caused to the shelter of many men, women and children escaping from war-torn countries.

The UNHCR also called on the authorities to prevent any future acts of violence by reinforcing security in and around the site. Efforts to find alternative accommodation to enable the closure of Souda should also be increased, the agency said.

Amnesty International urged police and judicial authorities to find the perpetrators and ensure safety on the island.

“These shocking attacks against refugees cannot be permitted to continue with impunity. For the last two nights, suspected right-wing extremists have thrown petrol bombs, stones and rocks down on the camp from castle walls, causing injuries and panic. At least one refugee was injured by a stone just this afternoon,” said Gauri van Gulik, Amnesty International’s Deputy Europe Director.

“Police and judicial authorities must not only take urgent measures to investigate these hate crimes and bring the perpetrators to justice but as a third night approaches, they must act to ensure the safety of the refugees on the island.”