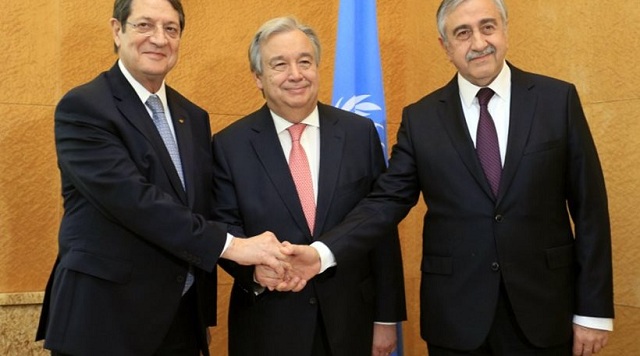 Negotiations for the reunification of Cyprus in Geneva have been “constructive” and are progressing but it is important to find a viable solution and not a quick fix, United Nations Secretary-General Antonio Guterres said on Thursday after chairing a conference on security on Cyprus.

Guterres said the issues of security and guarantees are very complicated adding it is very important to take into account the concerns of the two communities.

“You cannot expect miracles of immediate solutions; we are not looking for a quick fix. We are looking for a solid sustainable solution for the two communities and the Republic of Cyprus,” he said during a joint press conference, flanked by Cypriot President Nicos Anastasiades and Turkish Cypriot leader Mustafa Akinci.

“We are very close to an arrangement for the creation of a bi-communal, bi-zonal, federal Cyprus,” he said, noting talks have only just begun and expressing hope for a successful conclusion.

The conference is also attended by the foreign ministers of the guarantor powers – Greece, Turkey and Britain.
The head of the UN also hailed the courage of the two leaders during their 20-month-long dialog which he said created the conditions for Cyprus to be reunited. He clarified, however, that a lot remains to be done and that the two sides will take all the necessary time to achieve these goals.

Guterres said the UN’s role is to support both sides so that they can reach an agreement. “The solution would be a symbol of hope for the whole world,” he added.