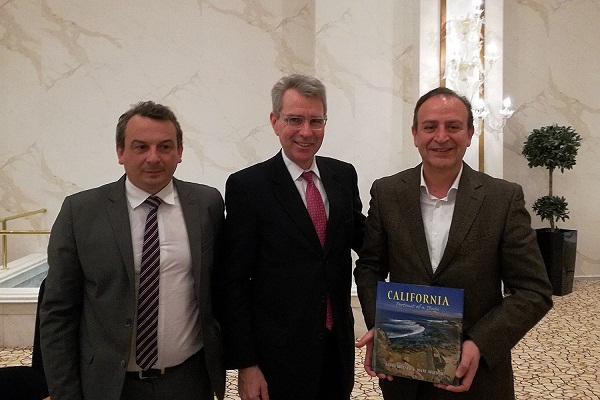 Ioannina Mayor Thomas Begas and deputy mayor for Education Pantelis Kolokas on Friday received the US ambassador in Athens Geoffrey Pyatt at the Ioannina city hall.

Pyatt, who was on an official visit to the northwestern Greek city, praised the municipality initiatives for strengthening the city’s bonds with Israel and appeared delighted with the strongly multicultural character of the city.

The US diplomat said that his country is interested in Greece’s growth, supports local authorities’ efforts in this direction, as well as initiatives for the development of technology, tourism, education and other sectors. He also displayed interest in the region’s potential prospects for developing sports, religious and cultural tourism.

According to a municipality announcement, Pyatt believes that Ioannina can become a hub for developing technology in Greece, due to its geographical position and its university.

“We want Ioannina to be an open city” said Begas, with Pyatt replying that the actions taken were “in the right direction”.

While in Ioannina, Pyatt revealed that the US Mission to Greece and the Greek non-governmental organisation Mataroa are planning to introduce the innovative coding programme ‘CodeGirls’ – which aims to reduce the gender ‘technology gap’ by teaching coding to Greek girls aged 10 and 16 – for the first time to Ioannina.