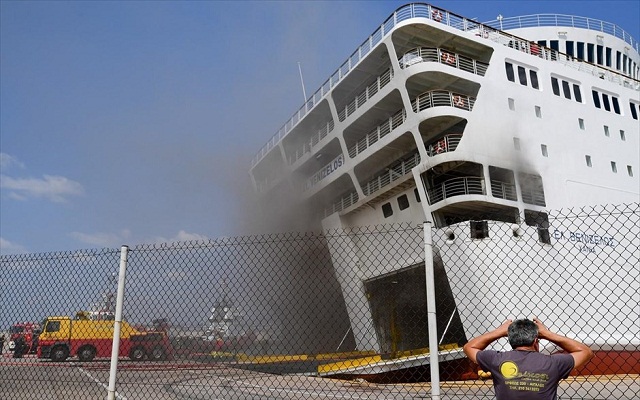 The vehicle decks on the passenger-car ferry “Eleftherios Venizelos” have opened after the fire brigade successfully contained a fire that broke out in the third vehicle deck using foam and water. The fire started while the ferry was sailing from Piraeus to Chania, forcing it to return to Piraeus in order to evacuate the 875 passengers to safety.

The Fire Brigade pierced the exterior walls of ferry “Eleftherios Venizelos” to pump fire-retardant and water to one of the ship’s parking decks, where a fire broke out late on Tuesday night, forcing the ferry to return to Piraeus.

The ship’s automated water sprinkling system and smoke in the vehicle deck impeded the firefighters, who as of this afternoon had not put the fire out.

The fire broke out after the ship had set sail from Piraeus at 22:00 to Chania on Crete, when it was sailing east of Hydra island. Authorities at Piraeus evacuated the 875 passengers and the non-crew staff of the ship. On Wednesday morning, some of the trucks were taken off, but most vehicles remain.

In addition, a flotation device has been set around the ship, which started listing from the water accumulated inside.

The causes of the fire are unknown, but initial information points to a short-circuit in one of the trucks.

“We cannot reach the point of the fire right now because the space is very narrow,” the fire chief said, adding that some of the trucks and vehicles have been burnt.

The ship owner ANEK Lines issued an announcement thanking all those that responded to the emergency and helped put out the fire, as well as passengers for their patience and understanding and following the instructions of the crew. ANEK announced that passengers can call the phone lines 210 4197470 and 210 4197420 for any further information. Some passengers have already been sent on to their destination in other ships, while others have been put up in hotels.