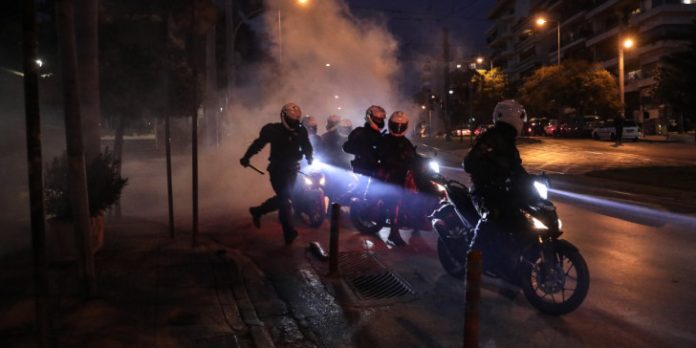 A policeman was taken to hospital and another three reported lightly injured as riot police clashed with thousands of demonstrators in the southern suburb of Nea Smirni on Tuesday, who headed to the local police station to protest police violence.

Police reported at least 5,000 people took part in the rally. When protesters reached the station they hurled petrol bombs, flares and stones against the police, who returned with tear gas, flash bangs and a water cannon to repel the attack.

Prior to the rally, police had released pictures of individuals carrying bars of concrete and photographs depicting large bags with water bottles filled with petrol confiscated by the police.

Protesters set several fires in the area, while images of broken car windshields were broadcast by national television ERT.

A police officer was injured in the head during the clashes while driving by hooded individuals who attacked him. He was taken to hospital and is out of danger.

The protest was held following an incident of violence between riot police officers and a man at Nea Smirni Square on Sunday.

A minister and police chief headed to “401” Athens military hospital late Tuesday evening, to visit a riot police officer who suffered head injuries during a protest.

Deputy Citizen Protection Minister Lefteris Economou and Hellenic Police Chief Lieutenant General Michalis Karamalakis were expected to be briefed by hospital authorities on the policeman’s injuries that occurred during a rally in the southern suburb of Nea Smyrni to protest police violence. The officer is out of danger.

Ten people were arrested and at least three police officers were injured during the unrest between protesters and police in Nea Smirni, Athens, on Tuesday evening, said the Attica General Police Directorate late on Tuesday.

In its press statement issued about the incidents, police said that the clashes were provoked by some 400 hooded individuals who broke away from the main march of 3,000 people. A total of 5,000 people had gathered at Nea Smirni Square just bofore the march began, the police added.