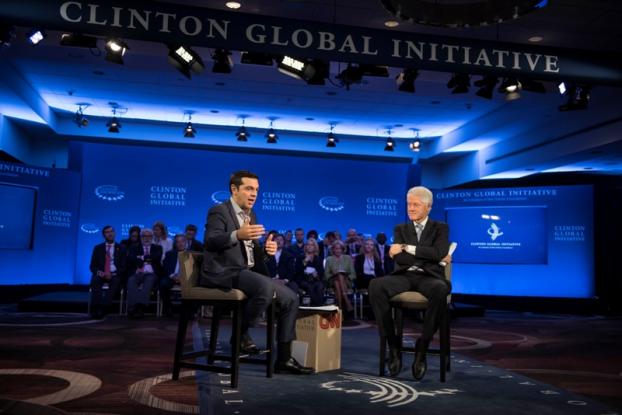 One of the messages in the latest WikiLeaks publication of Hillary Clinton emails is a July 2015 request from John Podesta, a close Clinton ally who is now Hillary’s campaign chairman, to the office of Bill Clinton, asking him to pressure Greek Prime Minister Alexis Tsipras into accepting the European Union’s debt deal.
Podesta’s message read as follows:

i’m on a train and hard to talk by phone. White House asked me whether WJC had enough of a relationship with PM Tsipras to call him and counsel him to make a deal. Can you ask him whether that’s in the realm of possibility. If yes, I can talk to him after I’m off the train and explain their thinking and what they are hoping to accomplish. Thanks.

“WJC” is William Jefferson Clinton, the former President. The reply from Mr. Clinton’s office was:

He says yes, but he’d need a lot more info than he has now. His immediate question is – are we pushing Merkle too? What time will you be available to talk? They have Charlotte, so just need to be able to give a heads up

The saga of the Greek debt deal is a long one indeed, and it is still in progress, as Eurozone ministers frequently reconsider their expectations of Greece and offer fresh packages of debt relief measures. Many observers have portrayed the situation as a drama in which Tsipras and Merkel are the lead actors. In recent years, the refugee tide from the Middle East has become a major plot point, since so many of the refugees pass through Greece.

In 2015, at the time Podesta made his request of Bill Clinton, Greece was nearing the end of a long game of brinksmanship with the EU, in which Greece rejected “austerity” conditions and basically dared the Europeans to let their immense debt go into default. Greek leaders were ready to gamble that Europe would flinch at the last minute from either the total fiscal collapse of Greece, or the country exiting from the European Union.

Tsipras was elected largely on the basis of rejecting the European Union’s demands, dismissing the bailout deal as an “absurd proposal” meant to “humiliate” proud Greeks. At his most hyperbolic, he even described the deal as an act of terrorism against Greece.

But sometimes, Tsipras spoke approvingly of the broad outlines of the deal, or stressed the importance of reaching an equitable agreement with European creditors, a painful but necessary step for Greece to move forward after “six years of darkness.”

At one point, he told the Europeans he would take the deal and then, within a matter of hours, told the Greek people they should vote against it in a referendum, which they did.

A week after the Greeks voted the bailout deal down with a 61% “no” vote, Tsipras signed it anyway, comparing himself to a defeated general signing surrender papers in a speech to his parliament. Depending on their opinion of Tsipras, his Syriza party, and the Greek government, observers either relished or lamented the irony of the charismatic young Prime Minister becoming chief salesman for the austerity measures he had once opposed with such vehemence.

Tsipras signed the debt deal within a few days of the email between Podesta and Bill Clinton’s office.

It is hard to say whether Bill Clinton played some role in that outcome, but it is interesting to note that Clinton was described as “friendly and protective” of Tsipras by the Huffington Post when the two attended a Clinton Global Initiative meeting in September 2015. Tsipras was given rock-star treatment, by an audience of movers and shakers that included actual rock stars, because Bill Clinton’s star power is said to be undiminished 20 years after he left office.

The overall tone of the event was described as “decidedly pro-Greek and unequivocally anti-German.” Bill Clinton reportedly “made it clear that he considers austerity to be a mistake, and that he believes Greece is entitled to an opportunity to grow.”

Other Wikileaks documents show that Podesta called around to other people he thought might be influential with Tsipras to avoid a “Grexit” from the European Union. In one exchange with Eleni Kounalakis, who was the U.S. Ambassador to Hungary, Hillary Clinton aide Jake Sullivan said Mrs. Clinton had “indicated her view that would be best to avoid Grexit.”