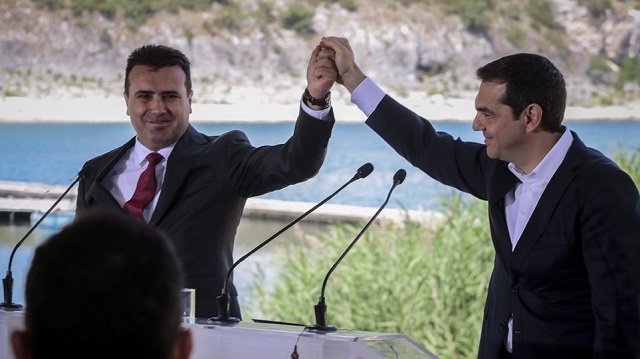 The citizens of both Greece and North Macedonia are both winners from the signature of the Prespes Agreement, the neighbouring country’s Prime Minister Zoran Zaev said in a statement to the Athens-Macedonian News Agency (ANA) on Sunday.

“The citizens of our country and of our friend Greece can be proud today. They are the generation that put an end to an episode of the unresolved peace in the Balkans.

Winners are also those who were against the Agreement, because for them too comes the time for prosperity, peace and friendship, as well as for the progressive citizens of both countries.

The brave citizens choose to get rid of the shadows from the past and to give the World a new Balkan of opportunities and political stability, a place of connected neighbors and friendship, an area of economic growth and a model for integration.

It is with both pride and gratitude that I congratulate my friend, prime minister Alexis Tsipras, for the victorious vote in the Parliament for the Prespa Agreement.

My gratitude extends to the parliaments of both countries. To all those courageous women and men who choose together to give their vote to the winning future,a vote that will put an end to the fears that were presented as insurmountable. We resolved a dispute that was presented as unsolvable.

Me and my friend prime minister Tsipras reached an agreement last summer. Together with our teams, led by the ministers of foreign affairs, we reached a moment of revelation: Each side has to give something in order to gain much much more in return.

From today onwards, we have a verified and deep friendship. Starting today, we are moving forward with greater strength to bring together our citizens of both countries. The future will no longer be seen as a fatal destiny, but as a joint road paved with friendly intentions and with values that stem from our European family.